It’s insanely late, but here is the part 2 of Hiking – My New Obsession! If you missed Part one you can check it here. Even though it was months ago, the colour of the landscape at The Valley of Fire in Nevada is still scorched on my mind. I knew that I wanted to explore some amazing desert scenery while I was in Vegas, so I googled and found Take A Hike Vegas and booked in a hike. David was fantastic and great with communication from the start. I had booked a midday hike (which on reflection was a very fucking stupid idea – it’s a desert FFS) and the day before, David contacted me and suggested we leave early in the morning before it got to hot and also before the National Park filled up.

The start of the day

David picked me up from my casino and we drove for about 45 minutes from the strip. Watching the country side change on the drive was amazing, then all of sudden you are hit in the face with the reddest rocks and the bluest sky. Like people say shit takes their breath away but this was fucking intense. The natural beauty of it. Realising that mother nature is the most lit artist ever.

But anyway… we stopped for the standard selfie before entering the park and already I was excited beyond belief. When

we parked at the start of the hike, I was so lucky to see some big horned sheep just doing their thing. David said not to approach them, and I was cool with that. Let nature do its thing, but I was legit happy to see them.

The hike started out well and good…. Walking some sandy paths through beautiful rock formations.. then David takes a left up a rock face and I’m like Huh? Where are we going??? “The path is here”, and he is like, you wanted to hike, this is the way we go.

Let me pause… AT NO POINT DID I WANT TO FREE CLIMB CLIFF FACES… but apparently that’s what we were going to do.  Now as most of you know I am terrified of heights. It’s a fear that developed later in my life (when I climbed the Sydney Harbour bridge in my late mid 20’s)

So when I had to follow David across a massive gap ion the rocks with NOTHING to catch me if I fell, I wont lie…. I promptly burst into tears and refused to go on. Now this is why David is so good. He basically said, we can wait here as long as you need, but it’s harder to go back the way we came, and you will regret this if you don’t go on.

So, I sat there for 15 minutes then thought fuck it, if I fall, I’ve got travel insurance, WTF LOL! So I crossed the gap and was so elated and proud of myself. Then David told me it took a super fit middle-aged dude A WHOLE HOUR before he would cross and then I felt kind of invincible at the moment.

Time to use the Imagination

Now the views were getting beyond amazing at this point and David was asking me what shapes and things I saw in the rocks… like you do with clouds. I have a very overactive imagination so it wasn’t long before I was seeing skeksis from The Dark Crystal and the white rabbit from Alice in Wonderland.

I was in love. I could totally do this! Fuck the threat of rattle snakes, tarantulas and scorpions (of which I was vigilant in looking out for! When you grow up in snake country it’s almost like a secret skill) I hiking and exploring and having the best time… Until David climbed up a fucking flat rock face and wanted me to do the same. I FROZE. Then I CRIED. And then CRIED some more.

NO FUCKING WAY. A gap is one thing, but scaling a rock with nothing to land on if I fall…..

He said I could take the easy way and go right up the rock face (which he did 3 times in a row to show me how easy it was) or I could go the hard way with ledges.. I took the hard way, which took 30 minutes and potentially the death of a small shrub that I crushed when I feel done a ledge.

BUT FUCK ME, I got there. And at the top the view was so so so worth it. I instantly made an Instagram story about how I didn’t die, and then I went about the rest of my hike like it’s all I’ve ever done in life.

Almost at the end of the hike we re-joined the path and ran into a tour group that was crass and loud and just yuck. I am so glad I took a private guide and really got to explore nature.

The other highlight was the ancient rock paintings from the first people. They are incredible and really show the history of tribes and hunting. I of course found one that looked like a ALIEN and as thus had my faith restored….

But seriously, the best, most amazing hike of my life. I will totally go back and do it again. And next time try not to cry so much….. 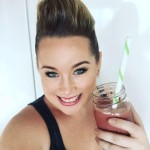 I am on a mission to get fit. A mission to be a better version of me.

I hope by sharing my journey, I might just inspire others to make the decision to change their fitness.